Originally released back in October 1986, the Tamiya Blackfoot 58085 1/10th scale truck was one of Tamiya’s first budget Monster Trucks. Based on the same ORV Space frame chassis as the Monster Beetle, Frog and Subaru Brat, the Blackfoot offered good off and on-road performance for both the beginner and intermediate RC enthusiast.

Front end double wishbone suspension and a rear trailing arm suspension set up with long throw coil over friction shocks allows the truck to perform well on rough terrain, although a recommended and worthwhile upgrade here is to fit oil filled shocks for smoother, more predictable performance of the Tamiya Blackfoot 58085.

The body shell on the Blackfoot captures the classic lines of the full size Ford F150 American Pick Up very well. Made from durable black styrene plastic, it reduced the amount of painting required to get the truck on the road greatly.

Good condition, original models are now becoming quite sort after and will regularly fetch prices in excess of £100 for just the model alone.

Originally released way back in March 1992, the Tamiya Bush Devil joined the fold as one of Tamiya’s Iconic RC Monster Trucks. Based on the same proven space frame chassis as the Blackfoot and Monster Beetle variants, the 2 wheel drive Bush Devil was an instant hit with RC fans around the world, but it featured a newer Lexan/Polycarbonate body shell with styrene additions such as the roll bar & bull bars, rather than the rigid plastic shells of the aforementioned Monster Beetle and Blackfoot. 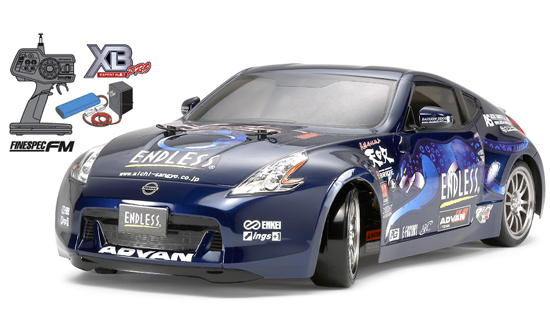 The SLS AMG GT3 is a racecar version of the September 2009-released Mercedes-Benz SLS AMG, and it is supplied to racing teams around the world. The aluminum long-nose, short-deck body is fitted with gull-wing doors and the functional interior features a roll cage. Down-force is provided by the front spoiler, large rear wing and rear diffuser, while the transaxle layout uses a sequential 6-speed transmission to transmit power from the front-mounted 6.2-liter V8 engine to the rear wheels.

Tamiya has faithfully reproduced this sleek racing machine in 1/10 scale on the TT-02 entry level touring car chassis. The TT-02 chassis platform is the successor to the TT-01 as it incorporates many new features to make it even easier for the new R/C kit builder to assemble and learn from. The TT-02 chassis performs well as cornering and overall speed has been enhanced to take advantage of new electronics available on the market. In addition to the TT-02 being an ideal platform to start from, R/C hobbyists can expand its potential by adding many of the Ho-Up-Options available to increase the cars speed and performance.